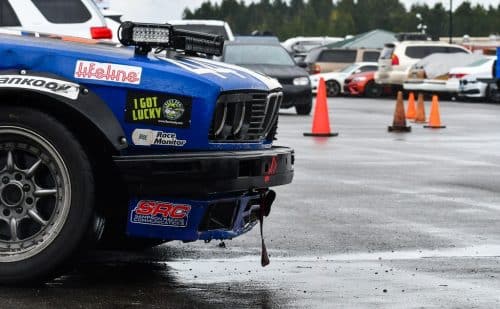 AAF’s First Lucky Dog Race of the year in Shelton! and what a race it was! The weather was a bit uncooperative both days but clearing up and allowing some sun to shine on Sunday.   both days were a bit crazy when it came to the race. Not to mention, this was the first race for our techs in the cars! Dan Grauger and David Gambino were in the #44 car saturday and sunday with dave making great time for his first lucky dog race!

The #44 had a unexpected meeting with the wall saturday morning and a short run-in in the grass later but ended the day 13th in class and 37th overall putting down the fastest time of 2:09.833(Hank) at the 116th lap. Sunday the #44 was doing Great in the beginning with the fastest lap time of the day being put down on just the 30th lap at 1:58.986(Hank). Dave followed up hank with some very consistant times in the low 2’s. But nearing around 3pm the #44 blew a rod ending the weekend for the #44 E30.

What a great weekend. Thanks again to our Race team, drivers and of course, The Lucky Dog Team! See ya Next Time.

0
Your Cart is empty!

It looks like you haven't added any items to your cart yet.